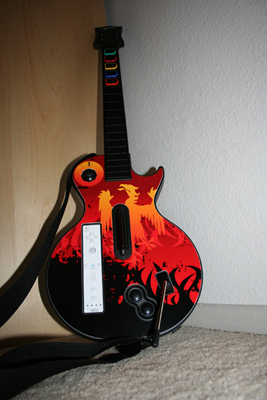 I know I have talked about Guitar Hero III ad nauseum, but I have one more story. As I mentioned before, there was an issue with the original shipment of GH III discs for the Nintendo Wii. The sound on the game (while advertised as Dolby Digital) was mono. Not even stereo, but mono. I sent my "broken" disc to Activision and I received my new disc in about two weeks. This was very nice because they had said it could take up to four weeks. Earlier this week I received a surprise: A package on my doorstep. I tried to remember if I had ordered anything online lately and came up blank. However, saying as how it was addressed to me, I opened the package and found a new faceplate for my GH guitar along with a note that said:

You recently received a Guitar Hero III Legends of Rock Wii replacement disc. To show our appreciation for your patience during the re-mastering and manufacturing phase of Guitar Hero® III: Legends of Rock for the Wii, enclosed is a complementary Guitar HeroTM faceplate from Activision/RedOctane.

If you have any questions or need any additional support regarding the re-mastered Wii disc, please don't hesitate to contact Activision Customer Support at www.activision.com/support. Once again, thank you for supporting Guitar Hero.

I actually think this was pretty cool of them, and I really like the faceplate... 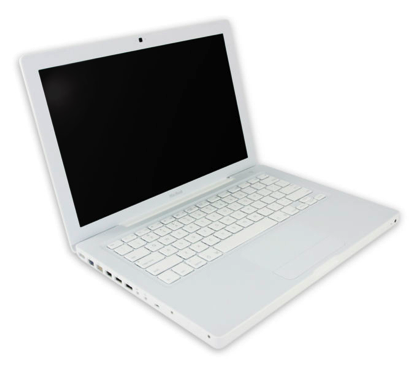 My past experiences with Apple's hardware and software has been less than stellar. In high school I remember the Macs in the computer lab as "the computers I could type faster on than the display could keep up with." My mother-in-law had an iFruit at home (she was a teacher...) and that thing was slow as hell and it seemed like it crashed every time I used it. As a result of these experiences, for a long time I have sort of looked at Apple and Macintosh fanaticism as very peculiar behavior.

Events have taken place since then, events that will go down in history I don't doubt. I think I first started to come around when Apple started putting Intel processors in their computers. Eventually I started to look at Macs as just higher-end PCs with an operating system other than Windows. Another event that led me down this path was my usage of Linux. From 1995 to 2005 pretty much the only operating system I used was Windows. That changed once I started to learn how to use Linux as both a server and desktop operating system. This taught me that learning a new operating system is not that difficult and is actually a little fun. Not only that, but OS X (the current Mac operating system) was built on top of a Unix kernel. What this means is that my experience using Linux on the command line actually comes in handy on the Mac. Finally, there was the fact that I knew how to use Windows, I knew how to use Linux, but I was still in the dark when it came to OS X. As a self-respecting geek, I couldn't allow this to continue.

As soon as Heather played with a friend's new MacBook a year or so ago, she announced to me that she would like one. I jokingly countered that I should get one first so that I could learn it and provide her with technical support when she needed it, and she (jokingly?) responded back with an "okay." Since then, I have been strategizing a MacBook purchase. Two weeks ago, after Apple updated the MacBooks, I approached Heather and somehow got her to allow me to run out and buy a MacBook, and I did just that.

So far, I have been impressed with the computer. I have installed a number of applications, and contrary to a Windows machine I have not seen an appreciable slowdown as a result. The computer boots much quicker than my Windows machines, and applications seem to be snappier. Now, I will never give up Windows, because I am a computer gamer. However, I am beginning to see the appeal of using a Mac for all the remaining computer needs. It's also nice not having to worry near as much about spyware and viruses. I'm still learning how to get the most out of this new machine, and there is definitely a learning curve when moving from Windows to OS X; however, like I said before: it's fun learning a new operating system. When it comes down to it, I can now finally call myself an equal opportunity geek as I use all of the major operating systems Windows, Linux, and OS X (or am I missing something?). 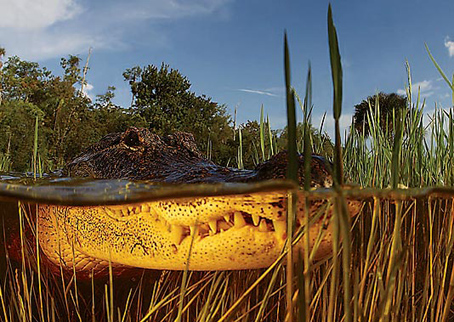 National Wildlife Magazine held a photo contest, and the winners and runners up took some pretty awesome photos. My favorite is the alligator you see above. Check the rest out here.