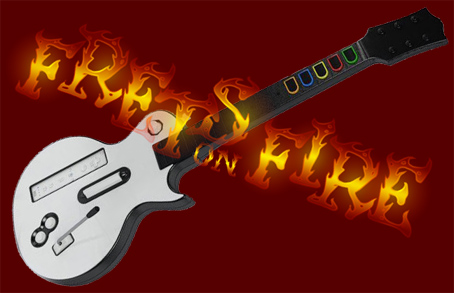 Background
I haven't mentioned it on my blog, but if you listen to my podcasts you know that the original release of the Wii edition of Guitar Hero III had some sound issues. Specifically, the music is played in mono when it is supposed to be Dolby 5.1. Activision has fixed the problem and is offering to replace discs for free. However, they require that you send the original disc back to them before they send you the corrected disc. They also ask that you "allow up to 4 weeks" after they receive your disc before you receive the replacement. Four weeks without Guitar Hero is unacceptable...

There is an open source (i.e. free) game called Frets on Fire that is very similar to Guitar Hero. Also, if you look around on the internet there are places where you can download the songs for Guitar Hero I,II,Encore, and III to be imported into FoF. So FoF was looking like a pretty good replacement for Guitar Hero on my Wii while I waited for Activision to send me the game back. It would also allow me to play the other Guitar Hero games that have not been released on the Wii. There was just one problem: by default, you play FoF with the keyboard. I wanted to play FoF with my Wii guitar, and it turns out this is something that can be accomplished fairly easily.

The How To
The one thing I needed to buy was a bluetooth adapter for my computer. If you were not aware, the Wii remote communicates with the Wii via bluetooth. I found this adapter at Newegg for ~$13 including shipping. Once I received the bluetooth adapter I installed Frets on Fire on my computer. I had problems with the most recent release of FoF, so if you want to play with the game I would currently recommend installing the 1.2.451 version here. Once I had FoF installed and working, the next step was to get the Wii remote communicating with my computer.

I followed the instructions here to get my Wii remote talking to the computer. You put the wii remote into synching mode and then the computer sees it and you configure it as a Human Interface Device. It was a little tricky, but seems to be working pretty consistently now. Once I had the Wii remote communicating with the computer, I needed a way to interpet the key presses on the remote. I accopmlished this with a program called GlovePIE that emulates joystick and keyboard input for multiple devices including the Wii remote. I then found a GlovePIE script on HonkeyKong.org that maps the Wii GHIII controls to keypresses in Frets on Fire. I actually modified the script a little for myself to invert the up/down joystick controls and to allow left and right joystick movement as well. If you would like to use my script, you can download it here.

Well, that's about it. I can now play Frets on Fire using the Wii guitar, and it works very well. I just synch up the Wii remote, launch GlovePIE using the script, and then launch Frets on Fire.

My presence on the internet has always been fairly sporadic. I've been doing this "blog" thing for about 4 years now, but my updates have never been that consistent. (I'd like to think I've been doing a bit better lately, though.) I also have my multiple podcasts, so I definitely do a smidgen of sharing online. I've resisted this thing called "twitter" for some time because it didn't really make sense to me, and I sort of felt that I already had everything covered with my blog and my podcasts.

Last week I had a lot of stuff to get done, and as I am wont to do when faced with a deadline, I started looking for ways to distract myself. The internet was the worst invention for my procrastination... Well, I created a twitter account, and have actually been enjoying updating it since then.

The idea of twitter is very simple. In 140 characters or less you are supposed to answer the question, "What are you doing?" You are encouraged to answer this question often, and the website facilitates this by allowing you send text message updates from your phone as well as typing them into a form on a web page. You don't have to always answer this question, I have found myself musing on things like presidential platforms and the English alphabet. I've had an account for about a week now, and have made 36 updates. You can see them all here. You can also see all of my updates including blog posts, podcast updates, twitter updates, and pictures I take with my phone on my tumblr page.

I may have gone crazy, but now you can all watch me go crazy as you read my "tweets." 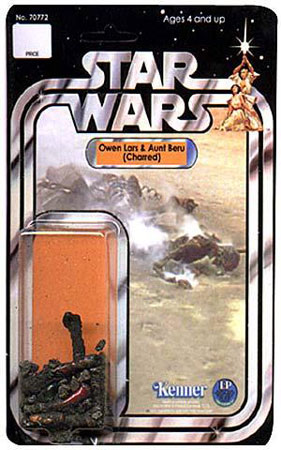 Stormtroopers can't hit the broad side of a barn, but they are really good at burning stuff...

I wish I could actually buy this. 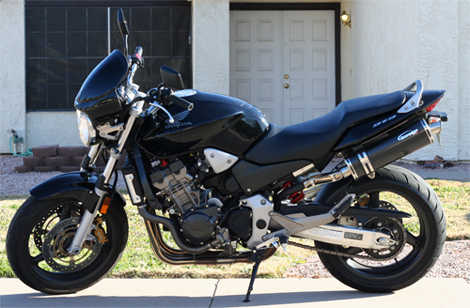 Four years ago Heather and I were planning on moving from our home in Tempe to our new home in Glendale. While we would be closer to family and friends, we would be further from work. We also could not figure out an easy way for us to carpool any longer. So, the decision was made that I would get a motorcycle as they are cheaper to buy and maintain than a car, the insurance is cheaper, and I can use the carpool lane. I purchased a 2000 Honda Nighthawk 750, and for the most part it's been a good four years and 40k miles. However, the time has come to replace my Nighthawk 750, and luckily I was able to replace it with the bike I have been drooling over for the last 3 years or so: The Honda 919.

The picture above is of my new 2005 Honda 919. The previous owner performed a few modifications to the bike, and I am happy with most of them. For reference, here is a picture of a stock 919. The 919 is very similar to my previous bike. Both have 4-cylinder engines, both are "naked" bikes (no fairings over the engine), and both have you sitting in a fairly upright position. The 919 has a larger engine (919cc vs 750cc), better brakes (dual-disc front and single-disc rear vs single-disc front and drum rear), and better handling. All in all, I am very happy with this upgrade.